Today I am thrilled to come to you with the book review of Rum Runner by Tricia Leedom as part of the book tour organized by Xpresso Book Tours. 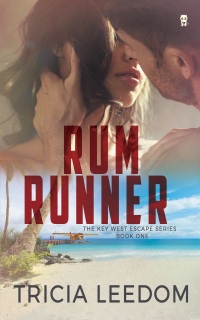 What is it about?

Perfect for fans of Susan Elizabeth Phillips and Janet Evanovich, this action-packed debut from a fresh voice in contemporary romance offers a sexy and comedic take on love, adventure, and what it means to trust your heart.

English socialite Sophie Davies-Stone has been longing to meet her father since she was a little girl. When he sends her a mysterious medallion and asks her to forward it to him in Miami, she can’t help herself from doing something totally un-Sophie-like. Rather than mailing it as instructed, Sophie hops on a flight to Florida.

But the family reunion never happens. Instead, Sophie is attacked and almost kidnapped by her father’s enemies. Her savior is Jimmy Panama, a cocky and annoyingly handsome former Navy SEAL. Sophie isn’t the only one who’s annoyed. After years of trying to find a way to pay back his CO, Jimmy never thought his debt would get him mixed up with his commander’s uptight, British daughter. He just wants to put her on the next flight home and get back to his low-stress life in Key West, but fate has other plans.

As Sophie and Jimmy embark on a heart-pounding adventure through Key West and the Caribbean, Sophie finds herself falling for the snarky American. Still, her head says Jimmy is all wrong for her, and the more she finds out about him – and her father – the more uncertain she is about who she can trust.

One thing is clear. Sophie is in way over her head, and her greatest adventure might be her last.

Sophie has never met face to face her father though they have maintained correspondence for years now. For her, her father is just a man who got her mother pregnant and then abandoned them. Even with this, she doesn’t hate him she just wants to meet him. So when she received a letter from her father requesting her to send back a medallion he had sent, she takes a risks and flies there to give it back personally, and finally meet him. Things don’t turn out to be so simple as some people are searching for him and are trying to use her as leverage to find him. Fortunately, Jimmy Panama, an ex-Navy Seal and former team member of Mike’s (Sophie’s Father) was sent to retrieve the medallion and in the way protect Sophie.

This was an intense high adventurous romance that transports you to the beaches of Jamaica and Tortola on the search of Sophie’s father while she runs for her life.  I read this in almost one sitting, as I just couldn’t put it down and I just did it when obligations came in the way of reading.

The best part of the book for me was the characters. Each one had such an intense personality that flew from the pages, even the secondary ones.

Sophie is a rich, strong, intelligent and a bit insecure woman that has always wanted to put a face to his father. She hasn’t met him though they have kept short and discontinued contact through letters. Even when she knows that he abandoned them when she was little she just wants to meet him. She has never met someone like Jimmy, without the manners of a high-class man and a big mouth that voices everything he is thinking.

Jimmy Panama is a rough, loyal and a womanizer ex navy seal that has come to live with guilt for something that happened in the past. He doesn’t want to settle down and all his women are the same, temporary.

They are just opposites so you might expect that something implode whenever they are together. It made me laugh and smile all through the book. I ended up loving Jimmy and the changes he goes through.

Another character that made me laugh with her reactions was the grandma, and how she is tough on the outside but not so much in the inside.

Even though there is a big mystery of who the person behind everything is, it is something that you can guess almost from the start, for the way the story is told. This could put off some people but the action-packed and the sexy scenes made it a very worth read.

The book takes off in UK and transports you to Florida and then all the way to the beaches of Tortola and Jamaica. I just could picture myself clearly there and feel the sun and hear the ocean. Loved how the author manage to do so.