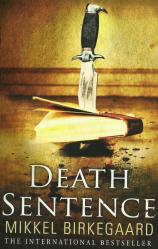 Where to find it: Amazon, Goodreads

Frank Fons, a successful thriller and mystery writer is days away from publishing his latest book “In the red Zone”, when he receives a call from his police source telling him that someone has committed his murder. After another murder is committed following the descriptions in his books he decides to investigate who is after him. The murderer tries to contact the main character by leaving him messages in a copy of the book he imitated with his killing.

Frank is a writer that makes a living writing the most horrible tortures and deaths, which you are able to picture during the course of the investigation he initiates.  His inquiry to find out who is behind these gruesome murderers transport the readers to the moment in which the books were written, telling you the story behind each one. A very graphic description of the killings is given, so be aware just in the case that if you are like me, you would want to jump a few paragraphs to avoid those images.

Mikkel Birkegaard is a Danish author of great success that falls within the Nordic crime novel genre, which makes certain characteristics highlight of his work: the main character, Frank Fons, is not considered as the perfect hero but have flaws and problems, as in this case the protagonist is a confirmed alcoholic; the pace is slow, with numerous flashbacks showing the actions that lead to the actual situation and his life, relegating the search for the murderer to the background; it delves into the psychology of the characters, allowing us to understand the motivations of the hero and his deepest desires, you might even dislike some of his comments and thoughts. The description of the characters is very realistic and very vary. This also helps us understand the decisions he takes; and it is a critique of the Nordic society. In this case it transports us to the lowest part of Copenhagen city where you can find prostitution, corruption in the police or the hypocrisy of people surrounding you (being famous lure him women that only wanted to become famous or money).

When I first read the back cover it quickly reminded me of the first chapter of the tv series Castle. I love that series, so hopes were high that it was a good book. It is supposed that the main point of the book are the murders in “real life” of the books of Frank Fons and the search for the killer behind. Although at some point the main character decides to start investigating, this investigation is relegated to the background, making the search for the killer not a priority. From my point of view, this takes importance from the murders and the way the killer might be found, which is the main axis of any detective novel. In the end the novel revolves around the figure of the writer, his life, rather than the murderer.

One thing I like from detective or crime novels is to try to find out who the killer is or what is going to happen next. In this case, I found the book full of clichés of this type of genre and easy deductions: the murderer victims are those in which the author drew for crime in the book; the main character becomes the prime suspect, etc. For me this takes the charm from this type of novels, and you have to add to this that the end is quite weird and doesn´t solve anything.

The way the book is written also allows the reader to get to know more the editorial world. The frivolous and superficial it can get as at some point, Frank decides to tell his editor about the murders imitating his work and the possible threat on other people they know. The answer from the agent was that it was a good way to push the sales up. They didn´t even care about the lives lost or the possible ones that can be lost. He only thought that he could gain more money that way.

Would you repeat on this author?